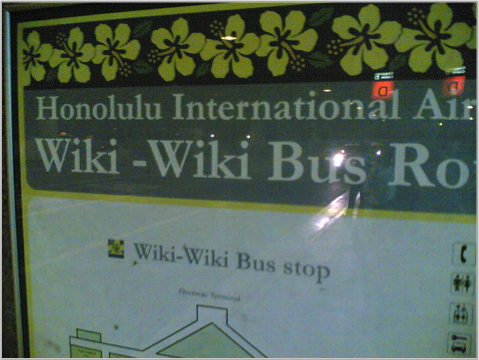 The Wiki-Wiki bus serves as a pretty good stand-in for end-user expectations in our hyper-connected, always-on digital world. Consider for a moment how information is accessed and consumed these days – everyone wants immediate access to real-time information, and they want that info delivered in a manner that makes consumption truly quick and effortless.

In fact, the word “Wiki” has been thoroughly co-opted by technology. Take for example, Wikipedia, the world’s largest “collaboratively edited, multilingual, free Internet encyclopedia”. Providing fast access to unprecedented volumes of crowd-sourced data, Wikipedia is home to some 31 million articles in 287 different languages. Its user-friendly interface makes finding information on gazillions of topics fast and easy.

The Wide World of Wiki
Wikipedia is frequently near, if not at the very top of organic search results in Google and Bing, two of the world’s most heavily trafficked search engines. According to the good folks over at Search Engine Watch, “For years Wikipedia has sat atop Google’s search results pages for a large variety of queries – usually in one of the top three organic positions. Wikipedia’s high search visibility has helped make the website the first stop for many searchers looking for information on a topic or brand.”

Think about that for a minute…Wikipedia is often not just “a” stop but the first stop for people looking for information.

And it’s not just casual users who rely on Wikipedia. A 2009 survey of 9,100 editors and journalists was jointly conducted by public relations and marketing solutions giant Cision and Don Bates of George Washington University. The findings were startling – a whopping 61 percent of respondents reported that they regularly use Wikipedia as a source.

Results of a January 2013 survey were even more dramatic, revealing 65 percent of US journalists, 82 percent of UK journalists, and a staggering 91 percent of German journalists rely on Wikipedia when researching stories. In a funny side note, the use of Wikipedia became so pervasive at one point that French news service Agence France Presse (AFP) banned its journalists from using Wikipedia as a source.

This all equates to people no longer considering Wikipedia as an obscure site useful only for gathering interesting tidbits on their favorite arcane subject, like the infamous Dancing Plague of 1518. Wikipedia is hip, happening, and a force to be reckoned with…and it can have powerful, lasting impacts on brand value and overall reputation management.

Wherefore Art Thou, Wikipedia?
You’ve heard that old saying: “You only have one chance to make a good impression.” It’s never been truer than it is now, especially in today’s aggressively competitive, customer-driven marketplace. Thanks to the Internet and Web, you have mere seconds to capture your audience’s attention; if you don’t make an immediate impression, you risk them surfing away somewhere else…like your competitor’s website.

Customers want information and they want it right now. As the world’s sixth most visited website, Wikipedia frequently fulfills this role, acting as a gateway or a jumping-off point in the information gathering process. Whether you like it or not, or if you’re ready or not, it often serves as the first encounter your customers – or more importantly, potential customers – have with your company, brand, product, or technology. And what’s being said about you on Wikipedia can indelibly affect customer perception.

In part two of this series, we’ll do a deeper dive into this Internet hotspot and whether you’re ready to make the leap into the wilds of Wikipedia.