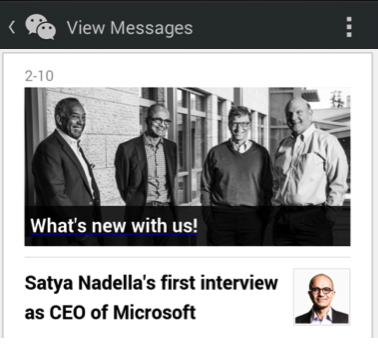 In Part I of this series, we introduced WeChat (Chinese: 微信; pinyin: Wēixìn; literally “micro message”), the challenger all-in-one mobile communicator from Tencent. WeChat seems to be able to do everything a smartphone user can possibly want, such as free video chat, text messaging, hold-to-talk voice messaging, photo/video sharing, location sharing and contact information exchange.

With the Chinese government blocking access to Facebook, Twitter, Youtube, and many blogging platforms, WeChat has been able to successfully position itself as a key digital marketing channel. If you consider the sheer number of mobile marketing apps available today, it’s likely the industry will see some consolidation in the market between WhatsApp, WeChat, Line, Viber, Nimbuzz, Tango, KakaoTalk, Voxer, and Kik. However, as China tends to favor local firms, WeChat stands a good chance of becoming the top mobile marketing channel in the country.

WeChat, Abroad
Since its introduction in January 2011, WeChat has grown at ultra-fast pace and Tencent is working hard to make WeChat the dominant global mobile messaging application. With eight languages, including Russian, Indonesian, Portuguese and Thai, it is growing fastest in Southeast Asia. It’s also making headway in Eastern Europe, the Middle East – the most promising markets so far are Vietnam, Turkey, Thailand, India and Indonesia, but Russia and Saudi Arabia are catching up fast.

Chinese Internet companies have long struggled to establish their products beyond the country’s borders, and WeChat remains relatively obscure in the US, where players like WhatsApp, Skype, Line, Viber, and Facebook Messenger dominate the mobile messaging market. But with 100 million Google Play downloads, WeChat is well on its way to becoming a major mobile channel that brands and marketer need to integrate to their toolbox.

“Chinese Internet companies are no longer behind,” says William Bao Bean, a former technology analyst who is now a managing director at venture capital firm, SingTel Innov8. “Now, in some areas, they’re leading the way.”[i]

Many of the largest Western brands – Burberry, for example – have already integrated WeChat as a marketing channel for their operations in the Chinese market. The opt-in feature allowing subscribers to receive customized content from brands is where WeChat brings added value. Promotions, exclusive news, and offers are delivered directly to registered and identified users, an important factor in a country where anonymous messages and broadcasters are regarded as a top national threat.

Burberry, an iconic British luxury brand, goes a bit further, having just announced a digital innovation partnership with WeChat. It aims to engage deeply with its Chinese customer base, by further establishing itself on this growing mobile platform that has become one of the most used in China.

Said the company, “Burberry followers will be able to view its London Fashion Week AW14 Womenswear show and personalise a digital version of pieces from the catwalk, which can then be saved or shared with friends. (…) Additionally, users will be able to text Burberry to receive behind the scenes images, video and audio that tracks the show from the perspective of two front row guests, including Chinese actress Angelababy.”[ii]

For now, early adopters are flocking to WeChat for social and business use. Unlike WhatsApp – which was recently bought by Facebook – WeChat is free to use. The foundation for mobile revenue is still a fragile one; the challenge will be to monetize its services without compromising user experience.

About the author:
Christian Dougoud is Senior Consultant and Head of digital at EASTWEST Public Relations. He is a digital expert with over 12 years’ experience with positions held in London, Beijing and Lausanne, his home town in Switzerland.

He is recognized for his published articles, his frequent speaking engagements to present on trends in digital marketing to various international conferences in Beijing, Moscow, London and Switzerland including the Davos World Communication Forum, The China Britain Business Council, the EUCCC (European Union Chamber of Commerce in China) Marcom, the MBA program of Hamline University, the China Entrepreneur’s Social Media marketing forum in Beijing and London’s Knowledge Engineers, among others.

About EASTWEST PR:
EASTWEST Public Relations is an independent PR agency based in Singapore, Beijing, London and Bangalore specializing in traditional and digital public relations. Since 1995, EASTWEST has helped over 400 clients become recognized in 12 Asian countries. Interprose has been collaborating closely with EASTWEST PR on global communications campaigns since 2011.