The World Cup and its Mobile, Global Stadium 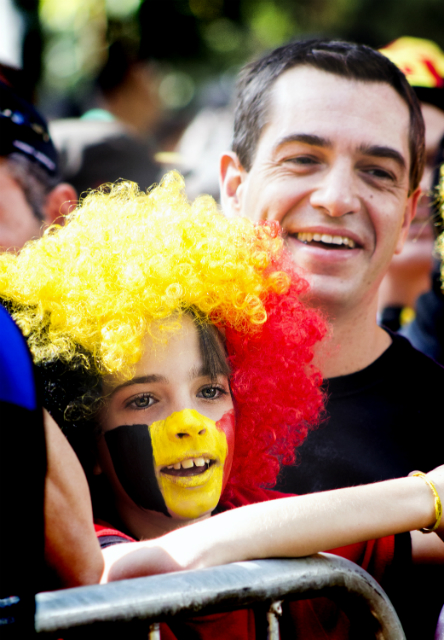 Although I became somewhat addicted, it seemed strange to see and hear people in the U.S. gathering together in various locations and shouting, “GOOOAAAALLLL!” for their favorite team.

Social media scored its own goal with the 2014 FIFA World Cup. Perhaps watching so many masculine, trim, and physically fit players running skillfully on the field mesmerized me – their agility to slide, trip, jump, pivot, kick, fall, limp, and run was impressive. On top of that, they were pleasant to look at even if when hot and sweaty or perhaps looking as though they were having a bad hair day or showing off a unique hair cut. Personally, I enjoyed their colorful shoes – it made things easy to follow.

I often hear it said that the U.S. is not very involved in soccer. I recently remembered playing kick ball with other kids when I was young many years ago. I wonder if that was an early form of soccer? Watching recent clips of children in other countries playing soccer barefooted in an open field makes me wonder if they are also practicing how to shout, “GOOOAAAALLL”?

While watching various games this year, I noticed a correlation of the soccer team players and Interprose’s team members. Both the World Cup teams and Interprose alike have a mix of talented and focused members from diverse geographical areas working together to deliver results – for their fans, country, and in the case of Interprose, for its clients. All of the team players have a great deal of stamina; they each bring such high energy and determination. Their individual skills keep them focused on their teammates (and in some cases the opponent of the moment) with help from fans and clients.

The World Cup and its Mobile, Global Stadium

The World Cup 2014 and the latest advancements in technology connected the world’s soccer fans before our very eyes. Gone are the days where our eyes (and bodies) had to physically be in the soccer stands themselves. In the past, most folks not lucky enough to be in attendance have turned to that old standby method – television – to watch the World Cup games.

For now, I won’t call the TV a “legacy” method to view the World Cup (not yet, anyway). For many of us in 2014, our eyes were indeed glued to the games, but from our smartphones, tablets, and laptops. These devices were streaming the matches in places like airplanes, trains, buses, cars, and I bet even on boats with nary a lick of land around them. ESPN stated that on Sunday, June 22nd, 490,000 people streamed coverage of the U.S. versus Portugal match on their mobile devices through the company’s app. That’s almost a half-million people, and that was only one game in the U.S. alone.

The camaraderie, team spirit, cheering of teams, cries of defeat, razzing of friends, and bonding of fans (many who were previously strangers) – the absolute BLISS of experiencing the World Cup live – has gone mobile and global through social media. And I love it.

For example, for the first time during a World Cup, I’ve been following Mick Jagger on Twitter (to say I‘m a big fan is an understatement). On June 19, he tweeted, “Let’s go England! This is the one to win!!” So when England lost to Uruguay 2 to 1, Mick received some friendly twitter teasing from around the globe (and lets not talk about the flood of tweets about the “Jagger Jinx”).

On Facebook, I sent a virtual hug to my friend who lives in the Canary Islands, in real-time, when Spain got their butts kicked by Holland 5 to 1. I mean, she really needed one!

But to be serious for a moment – advancements in technologies are providing the globe with meaningful advantages that our societies benefit from in countless ways. Advancements in areas such as telecommunications, smart cities, the Internet of Things, electric vehicles, and cloud computing are all pushing us towards a more sustainable, healthy, energy-efficient, and smarter lifestyle. But back to a lighter note, one has to appreciate all these technological advancements simply for allowing us to have some plain old FUN.

So even though Germany won the World Cup, I’m still happy. Because thanks to all the inventors, entrepreneurs, thinkers, risk-takers, venture capitalists, techies, marketers, sales folks, social media, fans, and individual consumers… we are one, big, connected planet celebrating our global connection and competitive spirit of the World Cup together—no matter how physically far apart we may be.