Little is the New Big: the Rise of Micro Influencer Marketing, Part I 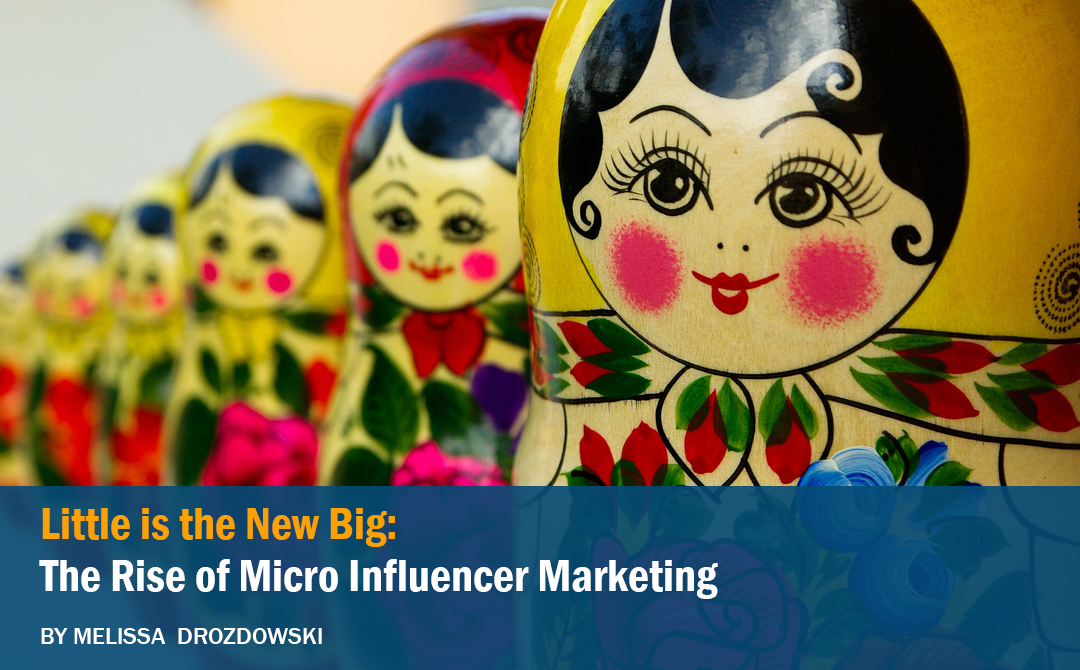 “Influencer marketing” has a certain cachet these days; it’s the buzziest buzzword that ever buzzed. Everyone wants in on it. Brands want to know how to put it to use, while wannabe influencers want to capitalize on its popularity. But, what is it? And why does it matter? And how come it seems like it’s suddenly on the tip of everyone’s tongue?

The Cult of Personality

Influencer marketing is about tapping into the power of people – influencers, specifically – rather than relying on traditional marketing campaigns. Social media influencers are those who can affect the behavior and buying decisions of others. When you hear the term “influencer”, someone with the last name Kardashian likely springs to mind. And why wouldn’t it? Kim K. (who, by the way, charges between $300K and $500K for a single Instagram post) has built a whole empire on the premise of being the Queen of the Influencers.

Why are influencers so important? Because we like being reassured about our buying choices. We want influencers to tell us that whatever it is we’re spending our money on is worth it. It’s precisely for that reason that consumers want to know what products their favorite influencer is buying, eating, wearing, and using on a daily basis. This means they can have a powerful impact on the perceived desirability and value of a product or service, which in turn, can make or break your bottom line.

While influencer marketing clearly has a role in the B2C space, what about B2B? Getting an endorsement from a celebrity influencer, even if they are using your latest agile cloud-based, IoT-enabled big data widget, isn’t going to carry much weight with B2B decision-makers. The business crowd wants to hear the opinions of experts, respected practitioners, thought leaders, and content creators rather than someone who’s merely assembled a ginormous Instagram following (sorry, Kim). What’s really important is authenticity and transparency. Business buyers are looking to hear about the real-world experiences of someone who’s actually used your product or service.

Even as the practice of influencer marketing has gained traction with brands, there’s been a significant sea change among audience attitudes toward its execution. The influencer landscape has become increasingly stratified, with influencers being classified by the size of their following. G2 Crowd has come up with a good definition of different influencer tiers, ranging from “mega-influencers” with audiences of 1M+ at the top end of the scale, to nano-influencers who have a mere 500 followers at the bottom.

While it never hurts to have a stamp of approval from a bona fide celebrity or mega-influencer, the sweet spot in influencer marketing has downshifted to micro- and nano-influencers. Why the change? One word: authenticity.

Even though these lower-profile influencers have less visibility, they’re often seen as being more “real” than their high-flying counterparts. Micro-influencers are frequently recognized as subject matter experts or credible advocates within their particular niche. They’re generally regarded as more trustworthy than someone who has amassed a gargantuan, faceless audience. And let’s face it – having a tight-knit group of followers can help foster a greater sense of community by presenting ample opportunities for genuine influencer-to-follower interaction. Is it any wonder that they have higher engagement rates than other influencers?

In Part II of this series, we’ll explore how to find and identify valuable micro- and nano-influencers in your space, why they’re a valuable yet untapped resource for the B2B community, what to do with them once you’ve found ‘em, and pitfalls to look out for when undertaking a micro- or nano-influencer marketing campaign. But just know this: if influencer marketing isn’t on your radar yet, it should be. But, just make sure you set your sights small.

Why the buzz around #InfluencerMarketing? Read our latest #blog by @Melissa_iPR to learn why #influencers are important and how they can boost your #brand:

Subscribe to receive the latest insights and updates from our Interprose team.