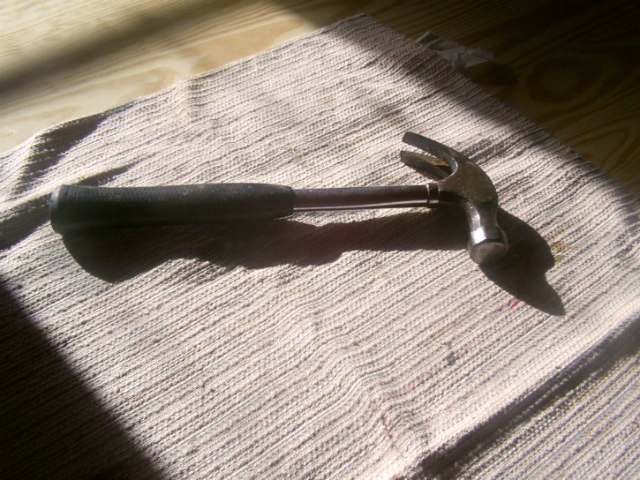 My dad did stuff all of the time. He built houses – really built them, I mean…held-the-hammer built them. He built a boat. He built a camper trailer. He fixed our broken cars, toilets and lawnmowers. He threw pottery on a wheel. When we decided we needed a new piece of art for a wall, Dad would paint something to the dimensions of the wall space we wanted to fill. He was always doing stuff. He was working on something all of the time.

Another thing that Dad expected that was really hard to actually do – not complicated, just hard – was to hand the hammer back to him with the handle pointed toward him. We’d be building a dog pen or whatever around the house, and Dad would bring only one hammer to the job site for us to share. Dad had a load more hammers than I have suits, so I know now that bringing only one hammer to the job had to be intentional on his part. He’d hammer for a while, and then he’d pass the hammer to me. And then I’d hammer for a while, and then he’d ask for the hammer back. And I was forever so worried about whether I had driven the nails straight and all the way flush with the wood that I’d unthinkingly hand it back to him head-and-claw-end first.

“Eric,” he’d say, sometimes more patiently than others, “always hand the hammer back handle first so that the next person can immediately start using it.”

Because I was too worried about my own thing to think about the next person, Dad. I know. I know.

Dad died in March 1999, and, back then, when Interprose was just getting started, I did a lot of freelance sportswriting, too. I wrote a lot about college women’s basketball, in particular.

That summer and autumn, I drove around the United States in a pickup truck. I’d stay in the cheapest, vaguely clean motel I could find; connect the room-phone line into my laptop for dialup Internet access; hope that somebody had gotten a cell tower erected near enough to wherever I was staying, and – voila! – I was a teleworking high-tech PR-and-marketing writer/freelance sports reporter.

On the first day of practice for the 1999-2000 season, I was in Knoxville, Tenn., to watch the University of Tennessee Lady Volunteers. The Lady Vols were coming off a season in which they had won 31 of the 34 games they played in, and you’d think that performance would be something to be happy about. But you’d be wrong about the 1999-2000 Lady Vols and especially their Hall of Fame coach, Pat Summitt, because Tennessee had won three national championships in a row before winning 31 or 34 but losing out in the previous tournament.

Practice has been going on for about 20 minutes, and a brand-new freshman Lady Vol passes the ball to one of her teammates. The teammate is on the run toward the basket, but she has to break stride to reach back and catch the pass.

“Erica! Erica! Erica!” Coach Summitt thunders, running onto the court from the sideline, yelling at the player who had passed the ball (“Erica” was not the real name of the freshman, who actually turned out to be a really, really great player, but I’m still not going to publicly call out the poor woman for a totally understandable lapse of concentration when she was 18 years old).

“Deliver the pass so that the receiver can be successful with the ball!”

I immediately thought of Dad.

And I still think of Dad – and Coach Summitt, who is now retired. I still think of their not-complicated, just-hard lesson every time I start to send off an email to someone where I suggest checking with someone else without also providing that person’s contact information or start to leave a thinking-out-loud voice message without erasing it and re-recording something more succinct, coherent and useful. And I still get things like that wrong at least as often as I get them right because it’s so easy to get so wrapped up in my own worries and not think first about what’s best for my co-worker, my teammate.

And when I do get stuff like that wrong, still, the Dad and Coach Summitt in my 45-year-old brain are hardly ever patient any more.