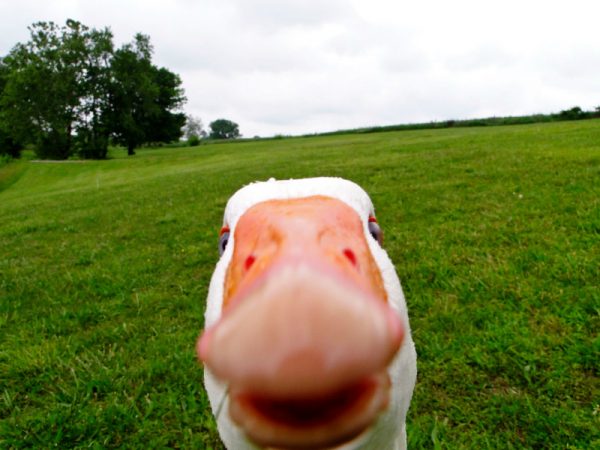 We’re only just past the halfway mark for the year 2017 and oh, what a year it’s already been on the social media fails front all around the world.

Leaving out the most obvious examples (paging Sean Spicer…), the first six months of the year have produced a cringe-inducing round of social media pratfalls. We’ve seen a growing brouhaha over fake news; epic corporate tone-deafness; dumb Facebook tricks; and politicians behaving badly. It’s a reminder that social media continues to be challenging for individuals and businesses alike. Things have gotten so bad that someone even coined a term – “milkshake duck” – to describe the social media hype/fail cycle. It’s a fowl turn of events, I tell you.

Momentary lapses in judgment happen to everyone – even yours truly isn’t immune. By its very nature social media is an amplifier, leading to scenarios where an otherwise forgivable error gets magnified exponentially, lending it greater substance and scrutiny than actually deserved. And this can mean consequences far outweighing the original mistake. One small slip on the social media banana peel, and suddenly the Internet vigilante mob is thundering after you, torches and pitchforks at the ready.

Whatever the case may be, common sense remains one of the socialverse’s most uncommon commodities. While these are humbling experiences for the people suffering through them, they also hold valuable lessons for those of us gawking from the sidelines. But enough of my sermonizing; let’s get on to the juicy stuff, shall we? Without further adieu, here is my list of social media fails from the first half of 2017.

Seemingly unsatisfied with the amount of negative publicity he earned for Bridgegate, New Jersey Governor Chris Christie is back at it again. In the midst of a standoff over a controversial state budget proposal, the Governor decided the best way to deal with the crisis was to close down New Jersey’s state parks and beaches during America’s biggest summer block party, the July 4th holiday. With the job of raining on everyone’s Independence Day celebration well done, there was nothing left for Governor Christie to do except head out for a weekend getaway with the family…at the beach. 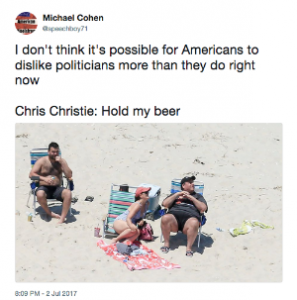 Alas, Governor Christie underestimated the tenacity of the American press corps, particularly the New Jersey Star-Ledger. The newspaper hired a private freakin’ plane to snap photos of the state’s first family luxuriating in the sun on the now-deserted beach, then promptly confronted the Governor with the photos during an embarrassing press conference. After haltingly denying that he’d been on the beach at all, Governor Christie instead took a page from Marie Antoinette’s playbook, suggesting that if people wanted access to public beaches during a government-ordered shutdown, maybe they should run for the governorship like he did.

Predictably, the flippant response didn’t sit well with New Jersey’s taxpayers. “Beachgate” became an instant meme magnet, attracting a high-octane frenzy of angry tweets, and causing the term “Chris Christie” to become the top trending Twitter topic in the U.S. The Democratic Governors Association took the opportunity to do some epic-level trolling, sculptors mockingly created a caricature out of sand, and an ethics complaint was quickly filed.

Now, while I’m all for making a dramatic exit, riding off into the sunset on your hobby horse with guns blazing probably isn’t the smartest move. That’s especially true if you have aspirations toward a continued career in politics. Sadly, it’s seems to be a lesson that Governor Christie hasn’t yet taken to heart.

Lesson learned: Don’t shoot from the lip. Remember what I said about social media being an amplifier? Innocuous, off-the-cuff statements taken out of context and magnified across the socialverse can come back to haunt you. And if you do err, put a holding statement out there – “let me get back to you on that” – to gain the time needed to formulate a strategic response.

For big consumer brands, constantly feeding the social media beast can be challenging. How do you come up with a steady stream of content that’s relevant, advances your brand, and resonates with consumers? Requiring exceptional creativity and management in equal measure, it’s a task that can trip up even the most experienced brand managers.

Take for example, UK snack-maker Walkers Crisps, which launched its #WalkersWave campaign in May 2017. The campaign asked Twitter followers to submit selfies in the hopes of winning tickets to a sporting event. Those photos were then used in a video series featuring retired English footballer Gary Lineker. Unfortunately, the campaign relied heavily on social media automation tools, and you can guess how that turned out, right? 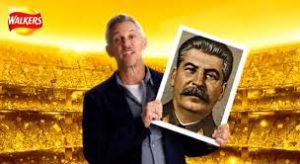 Trolls immediately hijacked the #WalkersWave campaign, leading to Lineker sharing screen time with Joseph Stalin, prolific serial killer Harold Shipman, and a whole host of other nefarious types. With hoots of laughter and lots of tut-tutting from UK audiences still echoing, Walkers shut down its campaign and apologized for not thinking things through properly.

Walkers Crisps shouldn’t feel too bad, though, because it’s in good company. Personal care manufacturer Dove, which has scored true success with its “Real Beauty” campaign promoting body acceptance, recently ran afoul of social audiences. In trying to project a positive body image message, the company launched a new line of bottles shaped like real women – slim, curvy, pear-shaped…well, you get the idea. But, what a bad idea it turned out to be.

Those real women Dove was trying to reach? They were less than pleased, and they let the world know. Loudly. Why? Many saw the campaign as patronizing, offensive, or in Jezebel’s case, “hilariously stupid”. And some snarkily pointed out that the new bottles only represent a tiny portion of the population: armless white women. While well intentioned, Dove’s campaign was a flop. Luckily for the brand, previous campaigns had amassed enough good karma with consumers to overcome its beauty bottle goof.

Lesson learned: What may seem like a brilliant campaign on paper is often the opposite in real life, because not enough forethought was put into its execution. During the campaign planning process, do be sure to seek out a diversity of input, whether through surveys, focus groups, or even just asking the guy in the mailroom what he thinks of your idea. And if you’re planning on using chatbots, AI, or other social automation tools, bear in mind that you’ll still need a human at the helm. Don’t leave these automated solutions to their own devices, unless you’re prepared to deal with the very human consequences that come along with them should things go awry.

If there’s one population that a brand should never manipulate for its own gain, it’s children. It’s hard-coded into our DNA as a species: always protect your young. Venerable brand McDonald’s recently learned the hard way what happens when you contravene that particular sacred cow.

In May 2017, the fast food magnate launched a new advert in the UK, in the hopes of making an emotional connection with young consumers and their parents. Regrettably (although not unexpectedly), the move backfired. The controversial ad tells the story of a young boy whose dad recently passed away. As he seeks out common ground with his late father, the boy realizes they’re not much alike. But then, his mother takes him out for a quick bite at McDonald’s, where he orders a Filet-O-Fish sandwich… his father’s favorite menu item. Boom! Insta-bonding moment, right?

Wrong. The advert came off as exploitive, insensitive, and insincere, prompting more than 100 complaints to the UK’s Advertising Standards Authority. Grief counselors were flooded with calls from concerned parents, while Twitter blew up with tweets of outrage. McDonald’s was forced to pull the ad and eat a super-sized helping of McCrow burger to appease the horde of furious social media users dancing the electric boogaloo all over its brand. 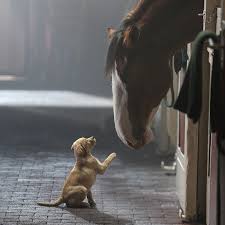 Lesson Learned: There are certain things that we as humans hold dear, and childhood grief is probably up near the top of the “do not exploit” list. When done right, the schmaltzy, tug-at-your-heartstrings approach to advertising is an effective way of getting your brand to go viral in the socialverse (see: every Budweiser Clydesdales commercial ever). But, developing these types of advertisements requires a light touch. If you’re going to tackle a weighty, touchy subject, you absolutely must be aware of and abide by societal taboos. Do use good judgment, tact, and empathy in your creative; don’t be tone deaf.

Every time I begin one of these social media fails blog posts, I’m always surprised at how much grist for the mill is out there. What is it about social media that compels us to ignore that internal warning voice, throw caution to the wind, and just go for it, no matter how crazy the idea may be? 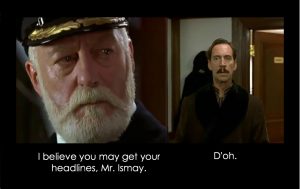 Maybe it’s an insatiable urge to get those follower numbers up or the need for their 15 minutes of fame that drives people to undertake things in the socialverse that they’d normally never touch with a 10-foot pole. It reminds me of that scene in James Cameron’s Titanic, where the ship’s captain dryly remarks to the White Star Lines’ attention-hungry managing director, “I believe you may get your headlines, Mr. Ismay.”

In the end, I hope that my semi-annual walks down the Social Media Hall of Shame – and the vital takeaways they provide – will help you to better understand the socialverse and how you can leverage it to your advantage without attracting the wrong kind of attention.