Summer vacations are over and the kids are back in school, which means it’s time to kick-start the fall show season with CTIA’s Super Mobility Week.

As you may know, CTIA canceled the spring event in 2014 so they could super-size their mobile presence this fall and play host to the largest mobile event in North America, six months after Mobile World Congress in Barcelona, Spain. This “mega” show casts a net far and wide over the mobile ecosystem, with themes ranging from the connected car, to the mobile wallet, to managing your healthcare from your mobile phone, to the latest and greatest phone, phone cover, and accessories – all the way back to the enterprise and the network that makes all of this work.

Some may ask, was the net was thrown too wide? Can the wireless association sustain a following for the full mobile ecosystem they set out to capture?

From the scuttlebutt in my circle, the jury is still out, but CTIA is diligently laboring to make it a success. With more than 40,000 attendees checking out the 1,100 exhibitors who in turn were hoping to get the attention of a thousand or so reporters and analysts, there was plenty to see and learn. 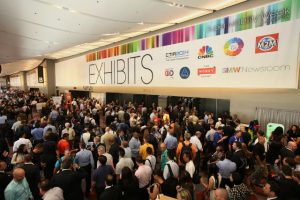 For the gadget companies, it’s a strong event at which to display their coolest new devices, accessories, and really dazzle an audience hungry for the Next Big Thing. And attendees weren’t disappointed – numerous mobile device vendors crowded the show floor with nifty gadgets. Samsung had a super-large, futuristic booth that was innovatively designed, and a team dressed like Smurfs in blue tops and white bottoms down to their shoes… a clever branding idea, in my opinion, that gave them instant recognition among the crowd. You immediately knew who the Samsung reps were walking the halls.

It was interesting to note that while Samsung had a massive and memorable presence on the floor, Apple went its own way, choosing instead to host a competing event launching the iPhone 6 and Apple Watch on its home turf of Cupertino, CA. But have no fear: the wireless association solved the dilemma of how to be in two places at the same time by streaming Apple’s two-hour keynote to the Vegas audience on Thursday.

There was a solid agenda of sessions and topics to interest and educate attendees from around the globe. Those who traveled to Vegas arrived to find flash flooding, and one of the wettest rainstorms in history. Luckily, the floods merely delayed travelers and the show did go on.

For vendors wanting to reach carrier customers and partners, I was told decision-makers were present but alas, not in great numbers. The speaking sessions were well attended; I observed full rooms packed with 100 attendees or more, and good participation from the audience. With all the positives, you’d think Super Mobility Week was a homerun but not so fast. I’m sure others may say differently, but the people I met with aren’t 100 percent sold on the ROI being strong enough to come back with a large exhibit next year.

I heard talk from vendors about not returning to the show floor itself, thereby skipping the hefty bill for booth space and instead renting meeting rooms, as some did this year. It’s not a bad cost-cutting strategy – reserving meeting room space is a good option for holding focused, collaborative meetings and demonstrations for your target customers, partners, and press and analysts.

Vendors need to weigh their options. If you’re going to attend events like CTIA, Mobile World Congress, and CES, and you’re launching a product that you want to demonstrate is cutting-edge and industry-changing (and your key audience will in attendance), then go for it. Pull out all the stops, organize and plan a solid product launch, construct a well-thought-out campaign, and collaborate with your marketing and communications teams to outline why your news stands above the rest. It’s also important to present a clear, concise message capable of influencing your audience.

Alternatively, if you have a focused message and a limited budget, a meeting room is a solid alternative. Pursuing this route allows you to communicate your message, and influence those key industry contacts, customers, and partners you’re looking to reach in one central location.

So, what will you do next year at Super Mobility Week? Share your thoughts in the comments below.